Think of karma as a metaphor for feedback mechanisms or a way of thinking about cause and effect. The idea of karma comes from Indian philosophy that dictates that good deeds will be rewarded and bad deeds punished, in this life or even beyond. So even if deeds seemingly go without consequences one can expect a future repercussion in a continued existence, through cycles of rebirths or reincarnations.

Christianity mirrors this message, though similar lessons. The bible has many verses exemplifying and emphasizing on the righteous and the wicked, with God seemingly testing the subjects and the reader to think carefully and indeed choose wisely, for judgement awaits in the afterlife. Though the idea of rebirth in Christianity is brought forward to a singular Earthly lifetime; one can be reborn in it by new found faith and choosing the path righteousness. At the end one is either condemned to the pits of Hell or granted passage to the Heavens. (Only) God’s son and his angels are sent back down to Earth, though it is also Devine justice that motivates in this belief and afterlife isn’t seen as a cycle of rebirth.

This is not to say that religion or even spirituality is inherently a righteous cause or a just path(!) The principle of Yin-and-Yang tries to teach us that there is a balance to things. One can not know happiness without knowing sorrow. Even Holy causes can be at the detriment to others. Religions and ideas compete as do the factions holding strong beliefs of self-righteousness. Moral superiority is a often merely a stance and not an active conquest. Showing virtue these days amounts to parroting whatever is the norm or trend.

Karmic Kick is not a site focusing on spirituality or religions, but is appreciative and embracing positive sides to our cultures and heritage. At the same time KK is about kicking up some dust, kicking against power-structures, kicking down false constructs, false ‘prophets’. Trust that karma and knowledge was earned and banked to permit such an undertaking! 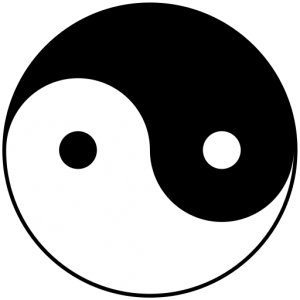 Whether sardonically or sarcastically ‘the road to Hell is paved with good intentions’. Trying to steer our joined trajectory away from doom is a group effort and avoiding pitfalls can only be achieved if our views are less limited or obstructed. Thusly ‘KK’ is an endeavor with righteous intent, no adds, no tracking, no spam, no ulterior motives or hopes of personal gain!

Staying critical and actively informed is advised as there are many sources, but not many giving clear pictures. Karmic Kick is about joining-in on modern discourse and diving deeper in to subjects, in the hopes of giving a fuller and honest view of current developments. Highlighting what is often left unsaid, to bring a balance to things.